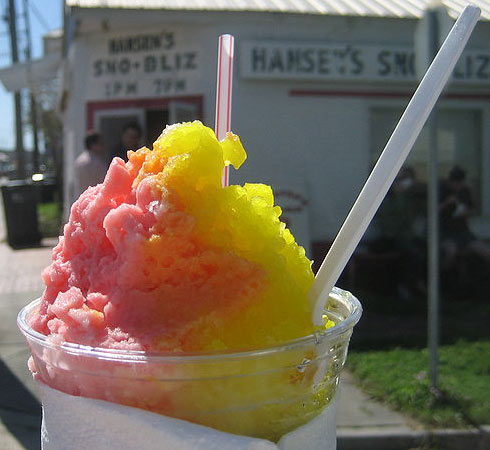 In New Orleans, we don’t get much snow.  In fact, we’ve only seen the stuff 17 times since 1853.  So we compensate.  We make sno-balls.  And, if you ask anybody who’s tried them, they’re a lot better than typical snow.

A lot of people confuse these two icy treats, though they’re really very different.  The famous New Orleans sno-ball is made with delicately shaved ice, making it fluffy like new-fallen snow.  A snow cone consists of ice that’s chunky and rocky, similar to the rock salt they throw down on the roads during snow storms up north.

The sno-ball is fluffy ice arranged on a cone to look similar to a snow ball and then doused with a rainbow-variety of sugary syrups.  They melt in your mouth and make you happy that you’re in New Orleans and don’t have to eat rock salt.

Where are the Best Sno-Balls in New Orleans?

Locals know all this, but if you’re visiting the Crescent City, here are five places to get you started on your sno-ball experience.

This popular destination on Tchoupitoulas Street started back in 1939, when Ernest Hansen invented the very first shaved-ice machine and his wife, Mary, began concocting delightful syrups. Hansen’s is still family-run.

On Plum and Burdette streets in Uptown, you’ll find one of the oldest sno-ball stands in New Orleans, launched in 1945.  People line up at this neighborhood mainstay for the sweetest sno-balls and other heavenly confections.

Here’s another super place to indulge your craving for one-of-a-kind New Orleans sno-balls.  The small stand is on Metairie Avenue and offers a selection of frozen desserts.

One satisfied local said it best: “Cream soda and cream chocolate with praline pecan ice cream and condensed milk. At one of the top 10 snow ball stands in NOLA.”  The restaurant is on Carrollton Avenue.

As you may have noticed, what we call “sno-balls” is often spelled in various ways.  Fortunately, that doesn’t matter.  If you’re in New Orleans and you read about a snowball or a sno ball or a snoball or a sno-ball, you can be assured they’re not falling out of the sky on a winter’s day.